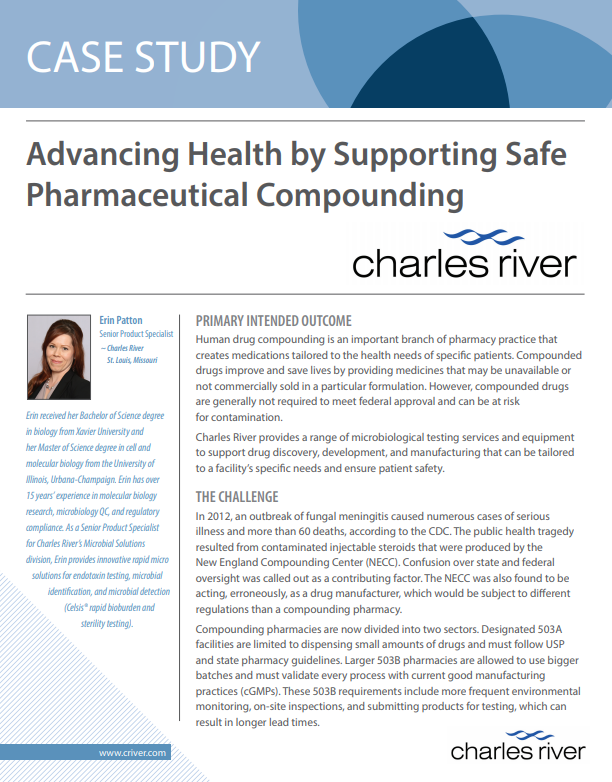 Human drug compounding is an important branch of pharmacy practice that creates medications tailored to the health needs of specific patients. Compounded drugs improve and save lives by providing medicines that may be unavailable or not commercially sold in a particular formulation. However, compounded drugs are generally not required to meet federal approval and can be at risk for contamination.

Charles River provides a range of microbiological testing services and equipment to support drug discovery, development, and manufacturing that can be tailored to a facility’s specific needs and ensure patient safety.

In 2012, an outbreak of fungal meningitis caused numerous cases of serious illness and more than 60 deaths, according to the CDC. The public health tragedy resulted from contaminated injectable steroids that were produced by the New England Compounding Center (NECC). Confusion over state and federal oversight was called out as a contributing factor. The NECC was also found to be acting, erroneously, as a drug manufacturer, which would be subject to different regulations than a compounding pharmacy.

Compounding pharmacies are now divided into two sectors. Designated 503A facilities are limited to dispensing small amounts of drugs and must follow USP and state pharmacy guidelines. Larger 503B pharmacies are allowed to use bigger batches and must validate every process with current good manufacturing practices (cGMPs). These 503B requirements include more frequent environmental monitoring, on-site inspections, and submitting products for testing, which can result in longer lead times.

Erin Patton was a Charles River customer long before she was hired to work there as a senior product specialist. As a microbiologist and lab manager at a large analytical testing lab at the time of the NECC crisis, she performed and reviewed hundreds of thousands of tests, including potency and sterility testing. “I developed a very good understanding of the regulatory issues facing compounders today,” she said.

At Charles River, Patton focuses on endotoxin testing, microbial detection, and microbial identification. These highly specialized tests often require expensive equipment and scientifically trained personnel to run them. It may not make sense for a compounder to take those functions on in-house.

“A compounder’s expertise is in making drugs, not testing them,” Patton said. “We offer rapid and reliable technologies that remove the possibility of human error and increase operational efficiency, which ultimately saves money. Our purpose-built portfolio of progressive products and services are targeted toward large and small compounders as they deliver accurate, relevant, and measurable data to fuel confident decisions on product quality for release.”

When it comes to environmental monitoring, Charles River supports routine dayto-day microbial monitoring as well as more urgent investigations. Clients who may be concerned about an organism found in their clean room or, more urgently, a product sterility test result that did not pass, need detailed and rapid results.

Genetic sequencing is considered the gold standard in microbial identification. An organism’s DNA will be the same regardless of phenotype or stress state. “It’s not enough to look at a sample and say ‘oh, there aren’t too many organisms,’” Patton said. “You need to know what species are present to learn how the problem happened and to understand potential patient risk downstream.”

The Charles River ID lab processes hundreds of samples per day and offers same-day and up to 5-day results, depending on the customer’s time frame. “We can take a sample plate and use genetic sequencing as well as MALDI-TOF technology to get a detailed result back within the day, if that’s what is needed,” Patton said. Those turnaround expectations are met 99.6% of the time with a 98% identification rate.

Charles River’s Celsis® rapid microbial detection systems deliver sterility testing results in 5 to 7 days, effectively cutting the waiting time in half. “This extra wiggle room allows more time to get the product to the hospital,” Patton said, which ultimately affects not only the bottom line but also patient well-being.

Some compounding pharmacies still fall under state pharmacy board jurisdiction, but they are experiencing increasing scrutiny from the FDA that is not likely to change. When inspections happen, they are usually unannounced and will require the facility manager to produce records to prove that cGMPs are being followed.

“We know it’s very important to able to produce documentation to show that a facility’s quality situation is tight,” Patton said. “Inspectors want to know what you are doing to assure quality and sterility, and they expect compounders to build quality into every procedure. This is one of the reasons the NECC got into trouble – their facility was not under control.”

Testing can tell you when a problem exists with a product; it can also act as a valuable surveillance system. “You may get something in your microbial identification results that is not going to show up in your product, but they can correlate. This kind of data allows you to take action before a big problem occurs. This is the point of what we do.”

Charles River clients are able to generate targeted reports through a web portal at any time. “Customers can do a deep dive into their own data,” Patton said. When it comes to proving compliance and control, she said, “it’s all about using that data to tell the story of your facility.”