The Advantages of Co-Branding With Medicine Shoppe International, Inc. 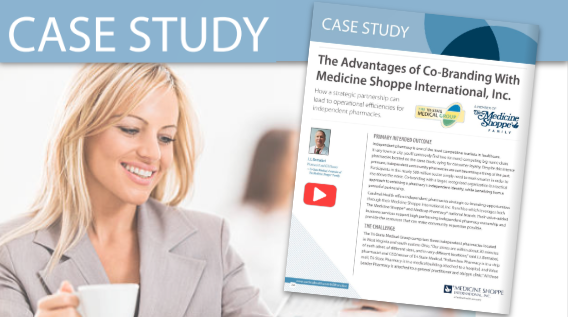 The Advantages of Co-Branding With Medicine Shoppe International, Inc.

How a strategic partnership can lead to operational efficiencies for independent pharmacies.

Independent pharmacy is one of the most competitive markets in healthcare. In any town or city, you’ll commonly find two (or more) competing big-name chain pharmacies located on the same block, vying for consumer loyalty. Despite this intense pressure, independent community pharmacies are not becoming a thing of the past. Participants in this nearly $80 million sector simply need to work smarter in order to rise above the noise. Co-branding with a larger, recognized organization is a tactical approach to retaining a pharmacy’s independent identity, while benefiting from a powerful partnership. Cardinal Health offers independent pharmacies strategic co-branding opportunities through their Medicine Shoppe International, Inc. franchise which leverages both The Medicine Shoppe® and Medicap Pharmacy® national brands. Their value-added business services support high performing independent pharmacy ownership and provide the resources that can make community expansion possible.

The Tri-State Medical Group comprises three independent pharmacies located in West Virginia and south eastern Ohio. “Our stores are within about 30 minutes of each other, of different sizes, and in very different locations,” said J.J. Bernabei, pharmacist and CEO/owner of Tri-State Medical. “Follansbee Pharmacy is in a strip mall, Tri-State Pharmacy is in a medical building attached to a hospital, and Value Leader Pharmacy is attached to a general practitioner and ob/gyn clinic.” All three pharmacies are Members of The Medicine Shoppe® Family franchise network and are open to the public, and Bernabai employs 80 staff members, including 12 full-time pharmacists. In 2013, Tri-State’s contract with Leader Drug Stores (a network of independent pharmacies affiliated with Cardinal Health) was expiring. Bernabei was deciding whether or not to continue that connection as he opened his third pharmacy location. He knew that going it alone was not a real option. “To succeed, you need to really push your operation to the limit and take advantage of all the technology in the marketplace,” he said. Independent pharmacy owners do not usually retain specialized marketing or technical staff, however. “We did it all ourselves,” said Bernabei. “That’s nearly an impossible feat for one store, so when you have three, it’s even more difficult.”

When Bernabei looked into co-branding, Cardinal Health’s Medicine Shoppe franchise option stood out. “We did not have anyone appeal to us on the cobranding side the way Cardinal Health did,” he said. "The potential partnership showed itself to be a positive prospect in many ways, including what is usually one of the biggest concerns for any business owner – cost." “We did our due diligence first, and found that the fees were actually a minimal part of the process.” Bernabei said. “Ultimately, the costs of the programs we purchased [as part of the Leader network] before co-branding were virtually the same after co-branding with The Medicine Shoppe® but we got so much more value.”

Co-branding provides advantages that go beyond aligning with a national brand name that customers recognize and trust. According to the National Community Pharmacists Association, 91% of prescriptions are covered by third-party contracts, making contract management an important challenge for independent pharmacies to master. “Rarely do I come across a contract that The Medicine Shoppe® is not already involved with and has vetted,” said Bernabei. “It can be difficult for independent pharmacies to establish contracts, so co-branding delivered a robust advantage for us. We are still three independent pharmacies, and now we contract along with several thousand others through The Medicine Shoppe® PSAO.” The co-brand connection also offers a wealth of marketing support, from store signage to social media branding. “We utilize just about every marketing piece they afford us,” Bernabei said. “The co-branding for the appearance of the stores is seamless, and our co-branded electronic signs are a big driver. Their in-store radio program comes with templates for ads that play automatically in our stores and on our hold messages; I would have had to create these myself or go without and miss the opportunities.”

Owners who join The Medicine Shoppe® franchise can retain their existing independent pharmacy names and simply add “A Member of The Medicine Shoppe Family,” to their brand identity. “People in our area recognize The Medicine Shoppe® as a credible brand,” Bernabei said. “They don’t see it as a mass merchandiser or an operation that is not independently owned.” If connecting to a recognized brand name boosts a community pharmacy’s visibility and trustworthiness, co-branding with The Medicine Shoppe® offers even more. “For us, the name was not the main benefit,” Bernabei said. “We saw the big advantages in what cobranding would do for our business model. It helps us operate more efficiently and lets us take advantage of programs that we otherwise wouldn’t have access to without being part of a bigger operation, including contract management. The Medicine Shoppe® is leading the pack on this.” Co-branding also makes his business more attractive to potential future owners. “Our plan is to expand our ownership [team] to a couple of our younger pharmacists, and their vision is to open even more co-branded locations,” Bernabei said. Through co-branding, Bernabei’s pharmacies all belong to the same PSAO, which allows for a simple purchasing model and consistent pricing. “These advantages are very attractive to younger pharmacists who want to be owners, but don’t have much experience on the business side. When we sell the business, the new owners can take comfort in knowing all they have to do is follow the code.”