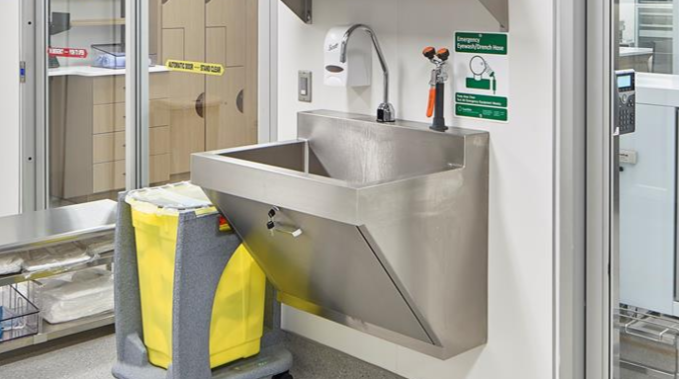 There are plenty of choices to be made when completing a cleanroom build. Of those choices, the anteroom sink might seem like an easy answer. The clinician will likely choose a hands-free operational stainless-steel sink with either a single or double eyewash device. However, a detail that is often overlooked is the location of the mixing valve and temperature gauge.

The many regulations and codes tied to equipment in cleanrooms seem endless and often confusing. While some are specific and easily understood, others are vague and change from state-to-state or region-to-region. Though the regulations specify temperature and pressure for the anteroom sink and eyewash, they often lack specification in the actual monitoring of the eyewash operation – including the temperature of the supply water for the eyewash.

It is important to look at these details when choosing a cleanroom/OR sink. Though many appear similar in construction, not all are conducive to certain regulations. In the cleanroom, it is important that there be ease of access to an under-sink temperature gauge so proper weekly monitoring can occur. In best practice, the sink will have a keyed knee panel that can be easily lowered or removed. This allows for quick access to service the plumbing, or when documenting operation and water temperature.

Though these two sinks seem similar, the sink on the right requires removal of multiple screws to gain access to the temperature gauge.

It is suggested that temperature monitoring of the eyewash and sink be discussed by everyone on the team (i.e. clinician, consultant, architect, and MEP personnel) and documented in the construction/submittal drawings.

Note: If tool-less access to the temperature gauge was overlooked on the project, there are viable solutions short of replacing the sink. For facilities using a wireless monitoring system, there are brands that offer a pipe clamp temperature probe with associated wireless transmitters. Though originally used in the hospital kitchen to monitor the dishwasher temperature, this may be a viable solution. Though having the ability to monitor this temperature and place alarm parameters exceeds the requirements, having this capability now may protect you from conceivable future legislative regulations.

Click here to read the Occupational Health & Safety’s (OH&S) document condensing some of the regulations surrounding eyewashes in the pharmacy.

Guardian Medical Systems provides products and services for hospital Pharmacies, Laboratories, and Cleanrooms that need to update their facilities, build new, or have a need to upgrade for compliance purposes. When it comes to hospital pharmacy, Guardian has a solution to fit your needs.